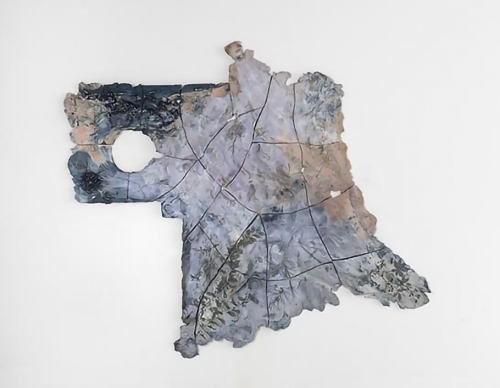 Night Gallery is pleased to announce the participation of Brie Ruais in the Craft Contemporary's second clay biennial. The exhibition is on view from January 25 to May 5, 2020.

Ruais approaches her ceramic practice methodically, as if it were a scientific experiment. Ruais uses her body as her tool, using the weight of her body to push around clay material in precise, self-prescribed actions. Because Ruais uses exactly the same amount of clay as her body weight, the mass of the clay she manipulates might seem like the mass of another figure: a double. Upon absorbing the impact and weight of her body, clay becomes a physical record of her actions, the only witness to her gestures. Only the titles that accompany her abstract sculptures reveal the details of Ruais’ process, with descriptions such as Push Ahead, Turn 180 degrees, Repeat. These titles hint at constraints, both of her body, as well as working within her own self-imposed parameters of set motions and methods.

Topology of a Garden, Northeast, 135 lbs. (2018) and Topology of a Garden, Southwest, 127.5 lbs. (2018) are part of a larger, seven-part series of works in which Brie Ruais records her garden in Brooklyn in a grid. Each piece covers a different area of her garden, mapping both the figuration and movements of her body with the figuration of her garden and her everyday movements upon these paths. Like her other works, the Topology series exposes the constraints of a project literally formed by the environment; what appears to be a hole cut out of Topology of a Garden, Southwest, 127.5 in fact marks the location of a potted plant which obligated the artist to go around in a way that records a perfect circle. Traces of her garden are visible, too, in the impressions of plant matter stuck to the fresh clay which are later burned out during the firing process.

The desire to map out land in the Topology series recalls the history of surveying, claiming, and marking territory in the United States, especially present in the mythology of the vast landscapes of the American Southwest. Ruais states,“The grid is something that historically has been used to divide up ceramics... into tiles. But I'm also thinking about how we approach dividing up the landscape, since clay has this relationship to the land as a resource that we've used for so long.”(1) Embedded in clay is both land and landscape: it represents the earth itself as well as the way the earth has been shaped, whether by natural phenomena or as a result of human action. In her attempt to sculpt a landscape, Brie’s work presents the opportunity to examine landscape in the making, in a delicate balance of negative and positive space.