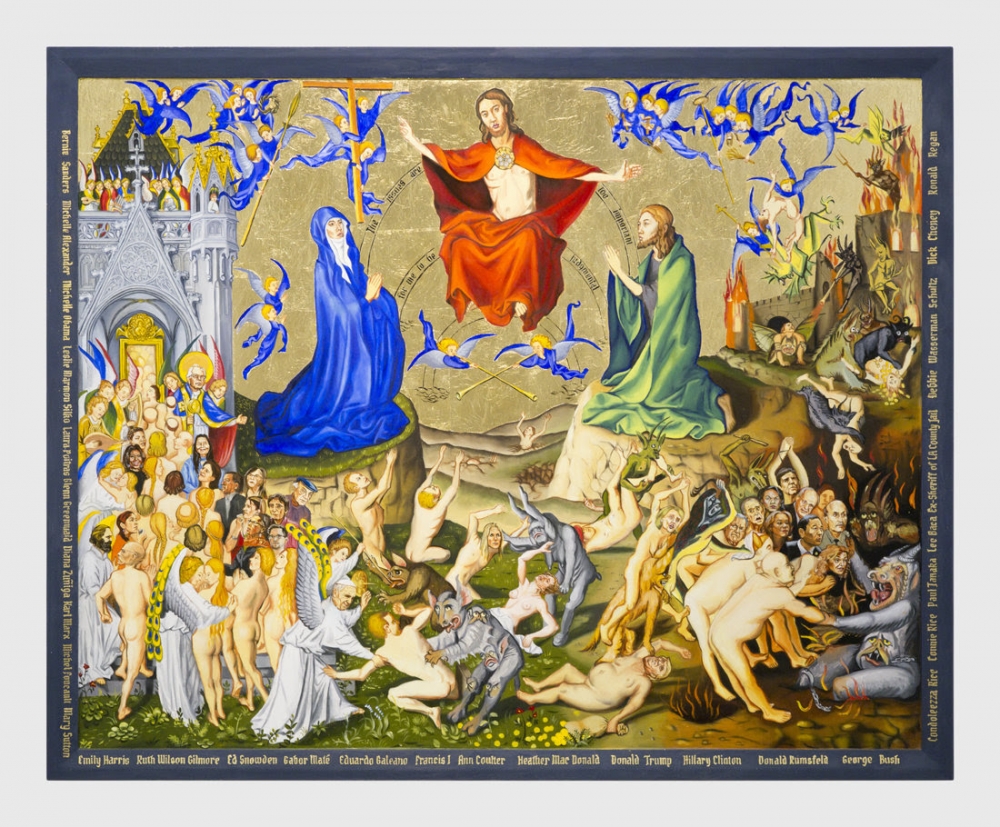 MAY 23, 2018 – Night Gallery is honored to announce the generous donation of Christine Wang’s “The Issues are Too Important to be Judgmental,” 2016, to LACMA’s permanent collection. Wang’s painting, made from oil paint and gold leaf on wood, originally appeared in her solo exhibition Devotional Art for Your Home, which was on view at the gallery in October and November 2016. The timing of the exhibition makes historic relics of the already-referential works, which were on view in the days immediately preceding and following the election of Donald Trump.

Wang’s work uses satire to confront profound societal ills as they relate to (and are ignored by) the arts as an industry and a discursive space. Drawing from her experience as a member of Critical Resistance, an organization working to abolish the prison industrial complex, her works explore the possibility of resistance against entrenched institutional failures. The works appearing in Devotional Art for Your Home re-envision specific 15th-century European religious paintings, compounding their spiritual symbolism with imagery out of contemporary American politics. Through art historical reference, Wang invokes centuries of turmoil and the escape that spirituality has long represented, while speaking to her subjective position as an individual meeting a world of inexorable conflict.

In “The Issues are Too Important…,” Wang recreates Stefan Lochner’s “The Last Judgment,” c. 1495, replacing its figures with contemporary political actors. Bernie Sanders, Leslie Marmon Silko, and The New Jim Crow author Michelle Alexander are among those lined up at the gates of Heaven, while Hillary Clinton, Donald Trump, and former LAPD Sheriff Lee Baca surround the fiery entrance to Hell. Jesus, Mary, and St. John watch from above, though their faces have been replaced with the artist’s likeness. Wang here playfully interrogates the role of the politicized individual, perhaps a voter, as a kind of arbiter of morality who classifies global politics using the Christian categories of good and evil. The overall effect of the work is one of ambivalent optimism, acknowledging the difficulty of present-day political engagement while honoring the idealism that has facilitated change through history.