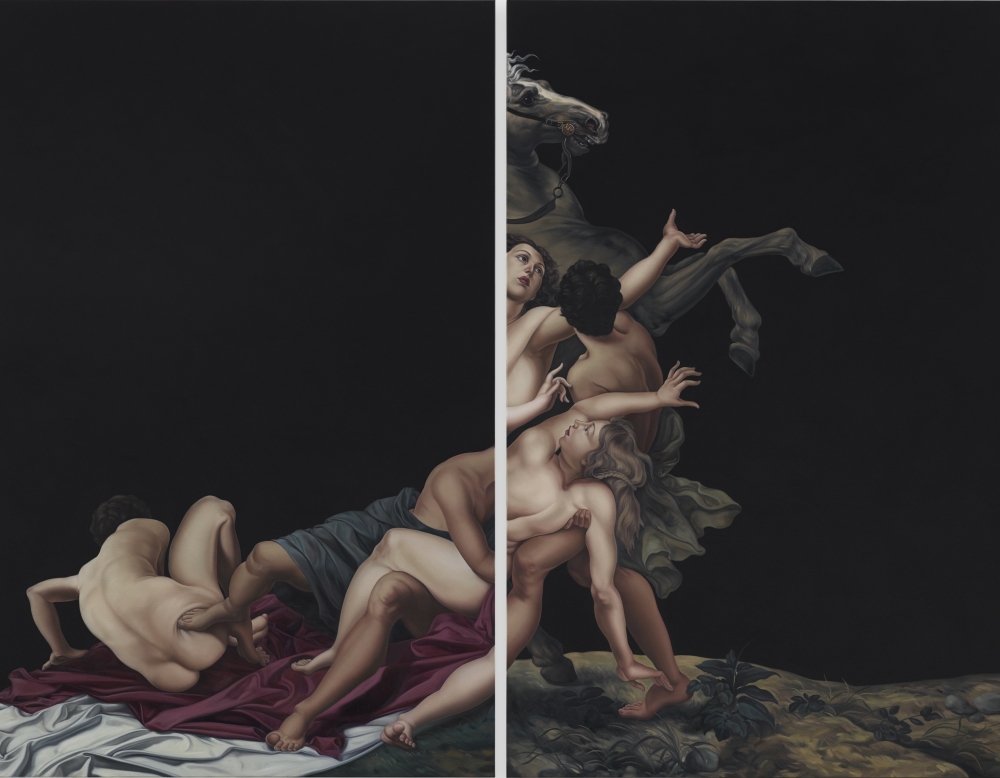 Night Gallery is pleased to announce the acquisition of Jesse Mockrin’s “Abduction," 2018, by the Dallas Museum of Art. The diptych painting first appeared in Mockrin's solo exhibition Syrinx, which was on view at Night Gallery from December 2018 through January 2019.

Mockrin is known for works that isolate and crop passages from historic paintings, subverting her source material to explore and disrupt persisting cultural narratives. The paintings in Syrinx derive references from Baroque history paintings of mythical scenes, in particular examining depictions of women and violence across several hundred years. "Abduction," a dramatic and monumental work, quotes from Abraham Janssens' "Pan and Omphale," 1607, and Peter Paul Rubens' "Rape of the Daughters of Leucippus," ca. 1618, placing them side-by-side while foregrounding their imagery of women in duress. Taking a historical approach rather than a personal one, the work nevertheless engages the highly charged topic of women's bodily agency in the present day, pointing to legacies of violence while suggesting possibilities of rebuilding.

"Abduction" is currently on view in the Dallas Museum of Art's European wing, temporarily filling the place of another historic abduction painting, Jean Baptiste Marie Pierre's "The Abduction of Europa," 1750.

Jesse Mockrin (b. Silver Spring, MD, 1981) received her M.F.A. from the University of California, San Diego, in 2011, and her B.A. from Barnard College, New York, in 2003. Mockrin has had solo exhibitions at Night Gallery (Los Angeles), Nathalie Karg Gallery (New York), and Galerie Perrotin (Seoul). In addition to the Dallas Museum of Art, her work is also in the collections of the Los Angeles County Museum of Art (LACMA), the Rubell Collection, the KRC Collection, and the Hans-Joachim and Gisa Sander Foundation. In 2017 she presented a solo project at Galerie Perrotin in Seoul, South Korea. Mockrin's work has been covered extensively, appearing in publications including Artforum, The New Yorker, Vogue, T Magazine, Modern Painters, and Art Agenda, among others. A catalogue for her solo exhibition Syrinx was produced by Night Gallery in 2019. She lives and works in Los Angeles.