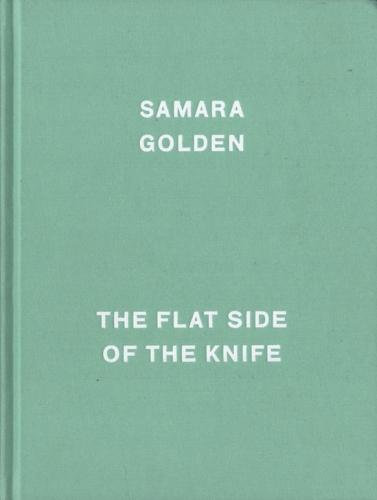 Los Angeles-based artist Samara Golden (American, b. 1973) creates immersive installations that explore what she calls the sixth dimension, where a multitude of pasts, presents, and futures exist concurrently. For The Flat Side of the Knife, Golden presents her largest installation to date, filling the double-height of MoMA PS1’s Duplex Gallery with staircases, beds, couches, lamps, musical instruments, video, and sound.

The Flat Side of the Knife combines physical spaces with illusory spaces that appear only in mirrors, reflecting what the artist refers to as “layers of consciousness,” akin to psychological and hallucinatory spaces in the mind. Her use of mirrors in conjunction with sculptural elements made from a silvery insulation board, known commercially as Rmax or Thermax, allows the illusion of space to expand in multiple directions; creating imaginary depth below the gallery floor, for instance, or suggesting adjacent rooms that do not actually exist.

The Flat Side of the Knife marks Golden’s first solo museum exhibition. She received her MFA from Columbia University and has exhibited her work at the Museum of Contemporary Art, Los Angeles (MOCA); Sculpture Center, New York; Night Gallery, Los Angeles; CANADA, New York; Cardi Black Box, Milan; Loyal Gallery, Stockholm; and Galerie Crevecoeur, Paris; among others. Most recently, Golden’s work was featured in the 2014 Hammer Museum Biennial, Made in L.A.